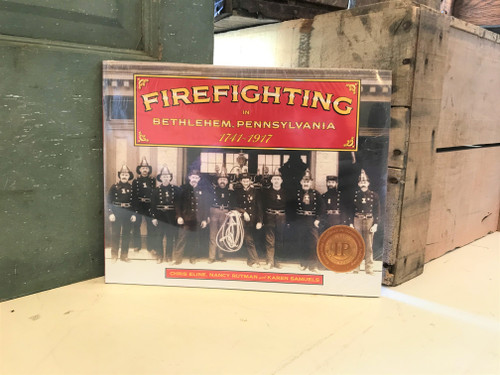 Firefighting in Bethlehem, Pennsylvania, 1741–1917 tells the story of how a town battled the elements—and won. It is the first of its kind, with many never-before-seen photographs.

The story begins with the bucket brigades of the Moravian community during the Colonial period, soon supplemented with two of the country's earliest fire engines. It tracks the path of the town's expansion to include the four boroughs that would eventually merge to form the modern City of Bethlehem. Each municipality had its own fire department, made up mostly of volunteers, and its own logistical and financial challenges. Water supplies and water pressure were unreliable, equipment frequently failed, funding was scarce, and unpaved streets were often impassable. Yet Bethlehem's early firefighters overcame each of these challenges and more with courage, humor, and camaraderie.

Featuring 200 extraordinary images of antique fire apparatus, firefighters, and more-many published here for the first time-this book will appeal to any historian who wants to experience the labors of the early firefighters of America.

Early Bethlehem and the Native Americans