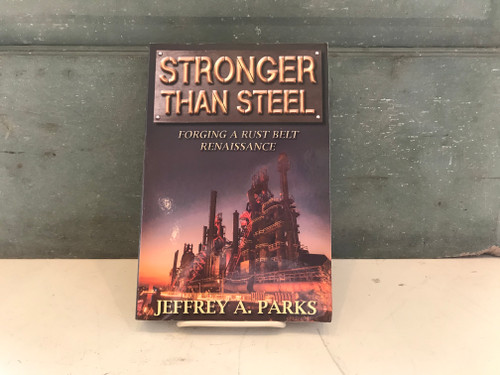 Stronger than Steel is a story of inclusion, entrepreneurship and resilience by the people of a small rustbelt company town that overcame the loss of its major industry and climbed back to become an vibrant, economically successful information age city. In 2016, among Pennsylvania cities with a population over 20,000, Bethlehem was one of two cities that had a greater population than in 1950, while boasting the highest median household income and the lowest poverty rate. Most impressive is that in the demographic of 25-34 years old with college degrees, Bethlehem, a city of 75,000, ranks ahead of the national average and just behind Pittsburgh and Philadelphia, the state’s largest cities. Bethlehem has successfully reversed the brain drain and has become a magnet for the educated workforce. This accomplishment reflects the expanded social capital grown in part by accessible arts programs that have brought the community together. With Latinos constituting 28% of the population and holding 2 of 7 city council seats, Bethlehem has continued its three century tradition of inclusion which began with the Protestant Moravian founders of the city. The book is, in part, a memoir by Jeffrey A. Parks, the attorney who conceived Musikfest, the downtown festival that premiered in 1984; Christkindlmarkt Bethlehem, an annual Christmas festival; and the Banana Factory Arts Center. Parks lead the team that developed the ten acre SteelStacks Arts and Culture Campus in the former Bethlehem Steel plant. Parks is an advocate for the incorporation of the arts in community and economic development planning. Stronger than Steel begins with a brief history of Bethlehem which was a closed Moravian community from its founding in 1741 until industrial revolution touched the town with a canal, then a railroad. When a zinc smelting plant opened in 1853, it was the beginning of hot metal production that lasted until the steel plant closed in 1995. It was iron and steel brought men from all over Europe, the Caribbean and Mexico to the town. The men brought wives who attracted industries that utilized female employees, including textiles and confections. The industries were the backbone of the community until after World War II, when the twin forces of deindustrialization and suburbanization conspired to turn Bethlehem, and most other industrial cities, into repositories of industries that were dying, impoverished residents who moved into the row houses abandoned by the now suburban middle class, and civic and religious institutions that lost stature as their patrons left town. Parks describes the federal and state policies that added to the mayhem, as suburban expansion was favored by federal highway and housing policies, and blight removal and housing for low income residents in cities were simultaneously supported, leaving downtowns to decay or be demolished as suburban malls became ubiquitous. It was in the midst of this crisis that Bethlehem turned to a festival, Musikfest to both support is small, historic downtown and to try to change the narrative that was inflamed by Billy Joel’s “Allentown”, the anthem of deindustrialization that includes Bethlehem in the lyrics. While Parks infuses his story and first hand observations throughout the book, he artfully incorporates the stories of many of the individuals who played key roles in developing the city that exists today including city officials, community and business leaders. Stronger than Steel is a passionate outreach to architects, planners, artists, arts organizations, community leaders and public officials to design urban spaces for community connections, a practice now called creative placemaking. Stronger than Steel tells a complex story that runs counter to the current narrative about the Rust Belt. For those interested in this pragmatic, positive version of our country’s troubled post-industrial communities, it is a must read.

Early Beth & the Native Am sc

The Body in the Vat Book

Return of the Native -Shad